Pinch me… we witnessed a dream come true.

Sounds like a fairy-tale, but in some sort of countrified way it was.

While in Nashville this past month, the Blue Bandana Country team was able to experience so many unforgettable moments. Leading up to our PR trip, we packed our schedule full of experiences we couldn’t miss and lists of ALL the places we needed to see and eat. We were even fortunate enough to have scored fantastic seats for the Grand Ole Opry and although that was a “Holy SHIT is this real life” event… this one is better.

This surreal “Pinch Me” moment came mid-week and completely unscheduled… shocking I know!

While setting up our jigsaw puzzle of six days, I was able to coordinate a time with our first Back Pocket Talk female artist Faren Rachels to come over and hang with the team. In relevance to our first phone call with her, Sarah and I brainstormed a follow up interview concept of #partypong.  This basically is beer pong with fun questions or dares under each blue solo cup – which we thought was a total stroke of genius. Then just like any game of beer pong we would play and as a cup would get made, Faren would answer the question or complete the dare on the bottom after drinking the beer of course.

Wednesday approached and we were excited to meet Faren and play #partypong with her and the rest of the team. When she arrived she immediately asked if her buddy Ray could join us. Apparently, they have a standing tradition of mid-week drinks every Wednesday afternoon and she had thought what guy wouldn’t want to join his best friend and a bunch of California #bandanababes?

We told her of course that was okay, especially knowing which Ray she was talking about. 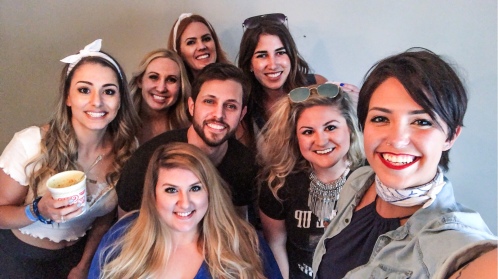 Ray Fulcher, was someone that we have kept an eye on through the Luke Combs camp since he had written a WHOPPING eight (8) songs on Luke’s debut album This One’s for You.

Blue Bandana Country has had a few of Ray’s songs on our playlists but ironically we have discussed his big break coming within the next year due to his addictive voice and recent attention from how well Luke is doing on the charts. Especially with his first #1 under his belt with When it Rains it Pours alongside Jordan Walker of Walker McGuire.

Ray arrived to the house and I’m sure had no clue what he was getting into meeting all of the girls but we went ahead and began to play #partypong.

Ray was on one side with me and Faren was on the other with Sarah; the rest of the #bandanababes were hanging out enjoying each answer and dare.

The questions ranged from “What is your Favorite F Word” which Ray of course answered “Faren” and dares like “say your favorite music lyric in baby talk” which Faren dominated with a Trisha Yearwood lyric. We even included industry questions like name a prolific female songwriter, pinch me moment, weirdest green room accessory, biggest career influence, favorite song on the radio, etc.

As Ray and I began to pull ahead in sinking cups, he received a phone call from Luke so we paused the game. Which was completely fine because there was nine of us chatting away about the last few days and catching up with Faren… so naturally there were plenty of breaks happening.

As he walked back in, I had noticed that he seemed a bit mystified. I asked my #partypong teammate as if we were new best friends “are you okay, you seem upset?”

He then preceded to tell us that Luke had just called and asked him to play the Opry stage that upcoming Tuesday.

I shit you not I even got chills typing that again.

It was this single moment that helped me recognize the magic of Music City and gave me something to believe in.

Musicians have a handful of milestones and goals that they dream of accomplishing. One of which is to play the Grand Ole Opry stage. This invitation to play is one of those “you never forget your first time” moments. To even repeat the words out loud for the first time I imagine was a bizarre feeling for Ray.

Fortunately from social media we are able to encounter these moments from afar. As country music fans we are able to read or watch the collected thoughts and get to indulge in the dreams of the singer songwriters we admire when they decide to share their news.

However this point in time, we were lucky enough to not read or watch the media. It was an honor to be able to witness the raw emotions that Ray unknowingly shared with us that day.  We were not there every step of his music journey like his family and friends through the years BUT being a part of that single memory is something that I will cherish for the rest of my life.

On top of the chills we received while learning that he would play the Opry… our #partypong game had its own trick up it’s sleeve.

Ray and I won the game with just two cups left on our side and due to it being an interview I told him we would drink the last two and he would still have to answer the questions.

The very last question on the last cup was “Pinch Me Moment.”

Do you think I am making that up? NOPE! I have nine (9) witnesses to the fact that Ray’s actual Pinch Me Moment happened on that day with the Blue Bandana Country team! 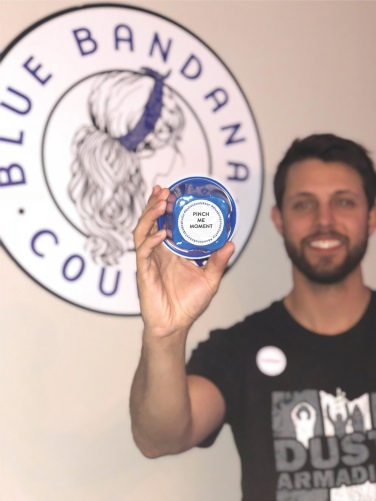 Ray being the incredibly humble and kind guy he is, asked if he could keep the cup along with the other artist gifts we gave him. Then with a sharpie wrote the date and “the day I found out I was playing the Opry.”

Congratulations Ray – We are forever fans and so excited for this next chapter in your music career.

On top of that… Faren! Thank you for bringing Ray over so we can share this memory with you too and we can’t wait to put together our #partypong post in the next week as well.

BBC Following – We will be following up with a more defined interview with Mr. Fulcher and some video treats.

Thanks to Greta almost getting kicked out of the Opry,  we have two videos below of Ray on stage with Luke!